Will the Angels come and sing to Marseille for the first time their famous song « Marseille » written in 1978…maybe this year ?
For those of you who don’t know about the Angels, they are an Australian band, formed in 1975 who toured with some famous people like AC/DC and David Bowie; they had a lot of success around the 80’s; after classic rock band adventure they reformed their « family » and toured again for around two years.

John Brewster told me yesterday how he wrote the lyrics « Marseille » :
Hi Annie,
Regarding the lyric of Marseille, I studied French at school, our teacher often visited France in his vacations and would show us photos of the places he had visited there, including Marseille. He helped bring the language to life by making us aware of the customs and culture – he truly loved France and the people.
One day I was driving my purple Renault down by the docks where some ships were tied up to the wharves, the band was in hard times (we hadn’t achieved success at this point) and I just felt in a mood to escape it all. For some reason my French lessons came back to my mind and I thought of Marseille.
The band played in Nice but so far I have never been to Marseille.
Best regards,
John

Nice story ! Be sure I will do my best to bring them to you ! They seem so cool people ! Exciting project, no ? Buzz, let down London and come better here to plan the next concert !
If you want to know more about the Angels, you can go the Rock and Roll geek show of my friend Michael Butler tonight (or tomorrow for France); he will post the interview he got with Rick, the guitarist and John’s brother.

Der Osterhase is in Marseille and he brought some Eierpod for you.
In this episode you will find some interviews of friends visitors and have an idea of the sounds I captured with my digital ears at the last concert in Marseille with the Mystik Motorcycles and the Cowboys from outerspace; I took a risk with the choice of « Shame » from the Cowboys but I like this song and it’s the challenge of meltingpod : you will find as eclectic sounds and colors as I am and as Marseille is too ! I hope you will follow me on this way and have fun ! Feel you free to give comments in the language you like !

Last night Marseille was red and hot : a real show on the stage, a real pleasure for the eyes (particularly for the women) with the Mystik Motorcycles, very funny, loud and sexy who opened for the gentlemen Cowboys from outerspace. I’ll do a podcast for you this weekend and you’ll enjoy their rock and roll !

The second podcast is here : fresh made in Saturday night fever !!
A great night with The Angels flying above the city and singing « Take me away to Marseille »: specially dedicated to Balthazar from the Balthazar : Happy Birthday today ! Then a weird portrait of the town through Eddie Spaghetti from the Supersuckers and the « answer » from Leda Atomica. To go to sleep with nice dreams or to dance in bed : Neurotic Swingers (have a look at my pictures on their site : Artrats Party oct 2003 and French Fries Party oct 2004 !!). 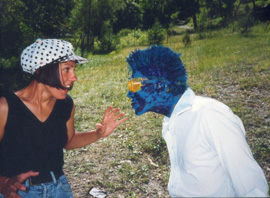 In Marseille you must be ready to meet anybody !

Nota : In my podcast I only play songs written by friends or bands I know personally , it means they give me the right to play their songs…unfortunately I didn’t know personally the Angels from Australia but I e-mailed them to ask for their authorization to play « Marseille » and…a few hours later…I got a nice answer with their agreement and a proposal to send me the next version if I give my address : I love the Angels, welcome to Marseille ! The pictures you can see on this blog were taken by me.

Believe it or not, he was playing rock and roll last night on a satellite
of the planet Marseille with Elektrocution and Neurotic Swingers, YES !
Obviously I did an interview, I even collected a lot of IDs for my podcast
and obviously my minidisc didn’t want to record; that’s life !
I’ll try to ask « where’s Captain Kirk ? » again. Maybe he decided to stay
here a moment; the place and the weather are nice, the women beautiful !

Incredible but true : the first sounds of the planet Marseille are coming on a podcast with Leda Atomica, Bebe Clandestine (Bea Paradis plays in Sub Rosa now) and the Hatepinks !
I gave up with all sound software, too complicated for me right now; I returned to the basics : raw sounds I give you to hear directly after recording : one time, one file ! no mix, no normalizing; next time it will be better. I hope you like my first short podcast though. 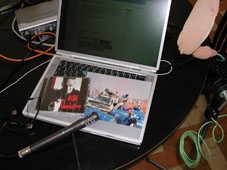 the colors of digital sound recording !!

Hi melting friends !
I’m absolutely not in a horrible mood, just a little flue and a big headache with the sound and recording problems these last few days.
A week ago, I had the idea and the wish to create a podcast but I understood nothingabout the workings of internet behind the scenes and nothing about the sound and compression world. As Michael Geoghegan of Reel Rewiews said, « nobody tells the future podcasters about the need to become their own sound engineer ». When I read this sentence it was like a smell of burning. Now I know why.
I made a short test this weekend which ran between Berlin, Paris and San Francisco (the luxury !) to ask some dj and podcasters friends what they thought about it. The answer was not bad but I was not satisfied with the saturated bass sound of a song and my voice too weak in comparison with the music (picture on the left).
Yesterday I met my friend Mr Brown and his brother Lionnel in their nice recording studio in Manosque to learn some important things about sound and software. It’s not easy to begin with this new equipment (picture on the right). I came back to Marseille sick and tired and went directly to sleep.
At 3:AM, I was awake (enough sleep) and I walked around my apartment…until I started my computer : no news, and before closing I tried Panther’s iChat again with my friend Michael Butler from San Francisco, my only contact until now; but with the 9 hours of time difference, we hadn’t spoken to each other for three years, except by e-mail. And this morning, a window opened and I heard : « Hello » in my computer…it was funny to speak together again…one hour free call…Marseille-San Francisco ! Yeah !
I encourage everybody who has a Mac and Panther to install iChat and we can speak free together.
I’m trying to record a short show very quickly now…for you, my melting friends !

ROCK AND ROLL !!! Sounds and Colors from Marseille…

Hey Hey ! Nobody wanted to write a word in English today…didn’t you want to spring in the water before the storm arrives ?
It’s time now ! Look at the nice sky in Marseille captured by my digital eyes :

This afternoon Ralf and I visited the CG13 establishment to introduce Eurocircle and Meltingpod projects to a politician we met together more than 10 years ago. We are trying to build a new European network as always.

I’m fighting with sound softwares to record something for you.
Meanwhile, here is a very good and clear article about the birth of podcasting:la radio personnelle, in French…aaaah ! (thanks to Luc Saint-Elie for the translation) and the link to the original text from TidBits newsletter in English.

Good morning everybody ! You answered quick and well to my internet call like a nice Babel tower. Thanks a lot ! I really love your different languages but it would be great too if you could write some sentences in English if possible, and nobody will be excluded. I will try myself to record my podcast the best I can first in English and then often a second time in French or in German. Allez ZOU ! Jettez vous Ã  l’eau, l’orage arrive.
This morning I drank my coffee reading and listening to podcasters friends full of anger: Mike against a possible podcasts new war ? Mike is a rock musician in San Francisco.
Luc against our French government and the media’s bad work. Luc is a journalist in Paris.
They both give an example of good podcasts. Have a look at their web-sites.
If you are interested in the vote about the European Constitution you can read the last editorial page of the Eurocircle news.
Today I was angry too : For the last two weeks, Marseille has been really near asphyxiation for everybody in the streets; every day the situation is worse, the whole town is becoming slowly but surely giant chaos…as on the way to school :

I’m cooking my own sounds on the fire wire…patience

Yesterday, the 28 th February, near the Mediterranean it was true…
look at the pictures, not a joke…pas de blague ! 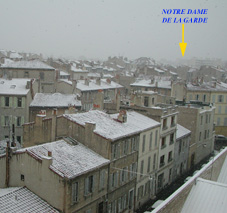 My name is Annie Viglielmo, I’m French, born in Marseille and living here.
This exceptional snow was a sign that I shoud begin my podcast…in the night, as often for such things :
Meltingpod was born on the web !
Thanks to Ralf Makrutzki the energizer in everyday life (Eurocircle), Michael Butler the inseminator through the internet (Rock and Roll Geek Show) and Luc Saint-Elie the obstetrician by phone (Audioblog).
The podcast was launched with bursts of laughter and the spirit of Rock and roll; I hope it will always continue !
The strange sounds from planet Marseille are coming in a few days…