Philippe Jazarin de la Machine a coudre a man who loved the women and the rock and roll, more exacly who loved everybody and the music.
He opened my favorite punk rock and roll’s venue at Marseille and he was my friend. The podcast interview is on line on Meltingtalks in French.

You answered to me with your usual humor last October 5th when I wanted to come and see you and to do an interview with you : « You come to record my testament before I die ? ». I answered to you : « No, there were more than two years we had to do that interview ! ». But we both knew the time was very short to do it : Philippe died last Thursday November 22th…
I edited that interview as you wanted it : without cutting anything !!
May the aboriginal spirits help you on the other side…kisses…
You remember : « for me you’re Marseille’s punk rock and roll heart »…and for that you will never die !!

Punk atttitude on stage : Olivier from the Hatepinks and Ingi from the Gee Strings at Marseille last week (my pic from Olivier is old, I still haven’t a new digital camera but my friend Luccio the Frog had one and took for me this one from Ingi !) Billy Hopeless from the Black Halos at Nice in 2006. Speaking about that band my friend Adam Becvare (Black Halos’ guitarist) played last week at London with the Lords of the New Church again. He sent me a link to a podcast (Yes I know I missed something !!) from THE LORDS LIVE FOR HALLOWEEN HERE !! Thanks Adam for that and (added Nov 9th) for the fine report from « the inside the show » straight ahead from Chicago !! Read it at the end of the review « Meltingpod Connections »!!!

Punk attitude in their mind : The Saints at New York City during their last US tour in November : Chris Bailey and Peter Wilkinson (Caspar Wijnberg in the background) on the pics from Dolly Llama and Marco; thanks you !!
Erratum Nov. 9th from Dolly : « it was in fact the New Jersey show ». oups !

Punk history : Buzzcocks Pete Shelley and Steve Diggle around my friend Luccio the Frog after a show in France 2006.

This picture I found in Luccio’s pics’ album remembers me one of my funniest podcaster’s memory !!! So here is a kind of punk story : Pete Shelley and Steve Diggle were my anonymous neighbours in a plane during three hours flying to Berlin in May 2006 …I just asked him politely where they were coming from when I sat down near Steve, crushed in a full up Boeing; he answered very shortly : « London ! » Pete friendly added : « and you ? ah ! Marseille, nice city ! » That was all for one hour…I was tired and almost asleep on Steve’s shoulder until I saw his tattoo on his arm : « Hey the Saint on your tattoo ! I did an interview with them »; Steve : « which one ? Roger Moore ? » Me : « Euh ! No ! Chris Bailey ! » Steve : « ah ! the Saintsssss, I’m Stranded ! hey Pete she interviewed Chris Bailey from the Saints ! » Pete : « ah ! yes ! I’m Stranded ! » and nothing more for one hour, we were the three almost asleep until we were flying above Berlin. Suddently I heard the air hostess asking them what they were doing at Berlin; answer : « we’re a rock band and we are touring Europe ! ». I thought a rock band touring in a plane ? strange, but I plugged my microphone with a podcaster’s instinct; they asked me : « oh ! an interview ? » Me : « No, just say your name, the name of your band and you are listening to Meltingpod  » the rest in on MY BERLINER PUNK PODCAST…ahaha ! At the airport Steve took a photo from me and someone in the band told me : « hey, Annie, you will become famous with that picture » ! I said goodbye with laughing. Nice story ?…:)


Punk video from Australia : My friend Robert James from GANGgajang with his other band JJ’s Way : Give the people what they want !! Everything…NOW !

Meltingpod Connections : Update November 15th
Have a look on my last pics and a listen to this very funny PODCAST INTERVIEW with JEAN-LOUIS COSTES an incredible French rocker who performs trash theater shows. I met him at Marseille last week just after he finished to play his last 50 minutes show « Little birds shit » and he made directly after that a second 40 minutes show just for MELTINGTALKS !!!
Update November 11th : Saints anedoctes during their New Jersey show sent by Dolly Llama in the comments section…happy Birthday Peter !!…:)
Update Nov. 9th : Fresh report about the Lords of the New Church show at London October 31th by Adam Becvare back to Chicago : Enjoy ! (more about Adam with an interview in April 2006 HERE on MELTINGPOD)
Hi Annie, Here’s my Lords report for you 😉
THE LORDS of the NEW CHURCH ‘007-
2 rehearsals and a fistful of Chaos!!
Insert Guinness and add Bordeaux HERE. This is what it is like to be a Lord again and it fits me just like a warm glove.
Much has changed in the New Church since June 2003 and I’ve never seen Brian James happierâ€¦ END_OF_DOCUMENT_TOKEN_TO_BE_REPLACED

What would ROCK AND ROLL be without THE GIRLS ???!!! Every rockers I interviewed for the Woman Show (what’s the best part being a rocker?) told me first the music on stage is their life and they couldn’t imagine doing anything else, but it’s rare if two minutes later (maybe one ??) they didn’t mention THE GIRLS !! Yes, Girls can be exciting groupies, faithful fans and friends but photographers and reporters too, often very talentuous (some of them even are podcasters now !!). So today I chose to publish with their agreement the work from some of them who shared with me their emotion in front of the stage or backstage during these last days or months (click to enlarge the pictures)…Enjoy !! It’s just a beginning because…
my WORLDPUNKROCKCHICKSGANG RULES !!!! 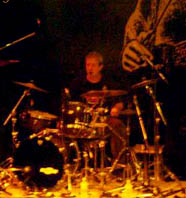 Angry Anderson, DaÃ¯ Pritchard, Mick Cocks, Paul DeMarco from Rose Tattoo at Postdam Germany August 2007. Bravo and thanks Helene for these SUPERBE photos, ones of the best I ever saw from the Tatts !! (more Helene’s pics on Rose Tattoo’s website’s gallery) 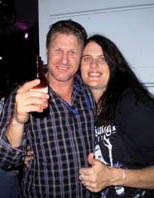 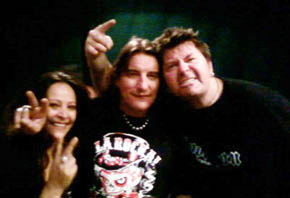 Darrel The Angels band‘s tour manager who came to Marseille last January) and Clair at the BSCC CD’s launch; Brenda with Mick and DaÃ¯ at Brisbane Queensland (Tatts’ last show after their Australian tour with MotÃ¶rhead) October 20th (Brenda : « as Nathan from « The Driving Conditions » took the picture of myself with Mick and Dai, Mick said  » hi Annie !! »cool ! hi Mick…:)

Now do you want to live the Bon Scott Celebration Concert CD’s launch at Perth with Clair ?? here a detailled report she sent me…not a classic review but just a message quickly written to share her first emotion after the show. She accepted to share it with you : I hope you will appreciate her walk that night !
From: partywithclair Date: 22 Oct 2007, 09:48 PM
« What a night!!! Just thought I would let you know how it went for me.
We got into the show about 1 hour or so after it opened. Missed the first band Hells Bells which I would have really liked to have seen. But it was impossible to get there any earlier. Then, on came the Party Boysâ€¦ END_OF_DOCUMENT_TOKEN_TO_BE_REPLACED