Darrel (Blue Tongue Management) I love your sense of taking a risk for promoting your new band Lawless Breed with just « Planet Marseille and Annie » as a name but you won !!! I GOT IT !! Thanks you for the smile which lit my face up seing that package above my mail box this morning…:) I understood your message : you seem to miss Marseille ! I will do my best to spread these albums at the good places.

On the second image, Ed Kuepper faithful to his « Do it yourself » way of life brought and gave me his new Live album himself…self recorded, self produced with his own label Prince Melon Records and self distributed for now !!! (cover photo by Judi Dransfield Kuepper).
For those of you who couldn’t have been present at one of his great shows during his last European tour with Nick Cave and the Bad Seeds or couldn’t be present at one of his shows during his next Australian tour (from August 9th to 16th at Sydney, AdelaÃ¯de and Melbourne), it’s a good way to have an idea of his new trio Live with Jeffrey Wegener on the drums and Pete Oxley at the bass (called the Kowalski Collective)…all the versions of the old songs are new and there are songs you surely don’t know…order it to Ed himsef to show your support to such an independant and positive attitude !!!
BTW : the interview with Ed recorded at l’Olympia at Paris June 9th, simultaneously translated in French by Eric Tessier from the rock radio show « Place aux fous musique » will be aired on Radio Libertaire 89.4 MHz fm July 25th from 1:00 to 2 :30 pm : !! I will publish that interview on Meltingpod too in August…stay connected !

Angry Anderson is my guest in this podcast as I was his guest at The Tatts’ show at Paris June 30th…he wrote to me he was happy to do an interview with me and I was happy to see Rose Tattoo Live again after one year…In fact we had a pretty strange conversation : Was Angry sharing with me a short moment of doubts or did he really announce a break in his musical carreer ? I tried other subjects like his last trip to China, his friendship with the French band Trust, the internet and the music but I was perturbed it’s clear. A few hours later, Angry was superbe of presence on stage like he really gave his last show in France ! The audience answered very enthusiastic, like a triumph at the first song what’s rare in our country.
The best for you is to listen to the podcast I illustrated with some excerpts from the Tatts’ last album Blood Brothers; I chose to finish with a symbolic song : « We can’t be beaten » !!

BTW : In the categories of this blog you will find all the reviews and podcasts I published about Rose Tattoo for more than one year ! Enjoy !

Meltingpod Connections :
Thanks Andreas who linked this podcast to his German fans website’s homepage Andora-rocks.de devoted in part to Rose Tattoo but you could also find there news from Doomfoxx, Nashville Pussy and AC/DC (coverbands and fans).
Thanks you Herko for your link on The Rose Tattoo’s official website with fresh news from the band after Paris and more…

The Angels during their Australian tour 2008 (pics from Craig Peihopa sent by Cat Swinton : thank you !)

I recorded that interview with Buzz in May and we spoke about many things (it was such a long time !!) : from the Aussie Rock Celebration Concert – Unveiling the Statue of Bon ScottÂ 2008, to the Sorry Day, the Jimmy Little Foundation, the arrival of a new government in Australia, the long way to reunite the Angels again, the new release of « Face to face » for the tour, the performances’ concept (we even spoke about Ed Kuepper !!), the ideas to play oversea and…Marseille !!
I played a lot of famous songs excerpts to illustrate this friendly conversation : « I can’t shake it, Waiting for the world, No exit, Out of the blues, Long Line, Marseille !!

Meltingpod Connections
If you want to hear and read my first connection with the Angels, check my first true podcast in March 2005 with Buzz’s first e-mail who reacted on Meltingpod !!! This podcast was in fact just a joke to reply to my friend Michael Butler who lauched the Rock and Roll Geek Show from San Francisco a few months before…who knew at that moment (where I couldn’t say one word in English !!) it could lead me to such a long trip…:)
I ranged in the category section of this blog under « the Angels (aka Angels city) all my reviews or podcasts about or with the Angels’ interviews or songs for more than three years now.
At least and again this nice little video sent by a fan Grant from the Goldcoast in May 2007 with Buzz playing drums but without the sound…:) 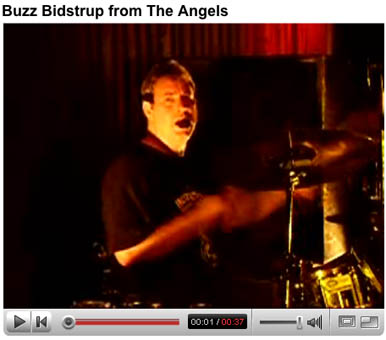 Great Live performance at Paris June 30th from ROSE TATTOO IN EUROPEAN TOUR !! The venue was not big but the audience was very hot !

Thanks Angry for the interview and Clarcky (the sound engineer) for my first lesson at the desk !!
Don’t miss their last shows in Germany, Holland, Netherlands, Portugal to finish in Spain July 12th !!
More pics with the Tatts at Paris and Angry’s interview coming soon but chronologically I will start by publishing the interview I recorded with Buzz Bidstrup last May just after Doc Neeson about THE ANGELS REUNITED and more…
The Angels are starting their AUSTRALIAN TOUR TODAY until August 2sd…together again after 27 years …check their NEW WEBSITE !!
with a nice video here to share this pleasure with you oversea !!

Watch how they look all great…ah ! Doc, Buzz you look so happy…I’m so happy with you even…from Marseille !!!