To listen to the interview with Angry Anderson Part 2 (mp3 : 35 minutes)
click on the icon

Angry Anderson, Rose Tattoo‘s singer with me backstages at Lyon-France during their last European tour : in this second part of the interview Angry is telling us many true stories about his life as musician and songwriter, father and citizen of the world, as a man who kept his anger to fight for more justice. A lucid look about the violence in our society.
I played 1854 from the last album Blood brothers, Assault and Battery (Angry explained the lyrics of this true story), and We can’t be beaten (to learn and sing for the Bastille day : « If ya wanna be in my gang, stand up with me, We’ll start a revolution and make the streets free…!! »).

Meltingpod Connections :
Today I was pretty amazed to learn MELTINGPOD IS SPREAD IN CHINA !!!

For months I was intrigued by downloadings from China on my server but bad tongues told me : spammers…No, it’s real ! Welcome to my Chinese Listeners and thanks to Insuns.com !! I hope they will like Rose Tattoo !!
Update July 2sd :
Dave a Tatts’ Australian hard and very old fan since 78 !!! (more than 100 gigs !!) sent us in the comments section a cool review about the Sydney concert with Guns N Roses June 23th : have a look ! and thanks a lot Dave !! I will put on line soon a special article with The Tatts’ fans who sent me so great stuff : pics, press reviews, stories.

To listen to the interview with Angry Anderson Part 1 (mp3 : 35 minutes)
click on the icon 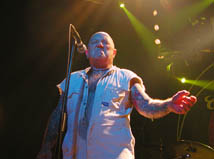 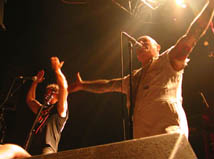 Rose Tattoo at Lyon-France April 2007 : Angry telling true stories in his songs and with DaÃ¯ in fusion with their audience !

Angry Anderson, Rose Tattoo‘s singer for me alone in the backstages during 1:30 hour, hey !! I propose to you to listen to our passionated conversation, in three parts around 30 minutes each. In this first part we started with a « family story » speaking about The Easybeats‘ two guitar players, George Young and Harry Vanda and their talentuous work at Albert Production‘s recording studio with Rose Tattoo and the three others very famous Australian bands AC/DC, The Angels and The Choirboys.
Then we spoke with Angry about his work as songwriter and some of his conversations with Bon Scott, the necessity of the tattoos, the reasons of his violence on stage with the band at their debut…
I opened the show with « Man about town » and some some short extracts from « Sleeping away » two songs from their last album « Blood Brothers » and « Scarred for life » for illustrating by moment the interview.
You can buy « Blood Brothers » on their label Armageddon Music‘s website or hear some extracts and buy song by song on line on Hardy TV.
I hope you didn’t miss Mick Cocks’ interview in the Meltingpod #64 ! 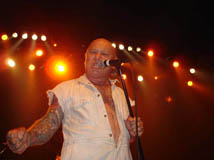 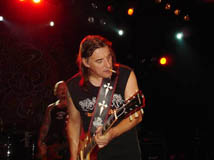 Angry and Mick (great pics from Stefan Tatts’ German fan)
I encourage you to have a look sometimes on Myspace/Meltingpod which became very dynamic !! It’s another way to communicate around the music.

The Anarchists Federation’s radio called Radio LIbertaire loves Meltingpod !! Last Friday Eric the host of the music show « Place to the fools » promoted my podcasts with Rose Tattoo and played a song from Ed Kuepper to announce my next podcast with him soon !! He will air June 29th my entire show with Nonstop recorded on Meltingtalks for the Eurockeennes last year ! Thanks for that help Eric, it’s very cool for me and the artists !

The Neurotic Swingers Live at Marseille- Part 2 : a free concert I recorded just one day before Christmas 2006 at  » Le Poste Ã  GalÃ¨ne. Enjoy !

To listen to the podcast with The Neurotic Swingers Part 2 (mp3 : 20 mn)
click on the icon 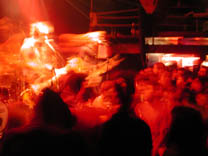 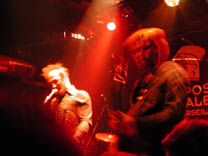 The Neurotic Swingers on stage, musicians and music lovers in the audience : a melting of high energies !

To listen to the podcast with The Neurotic Swingers (mp3 : 25 mn)
click on the icon 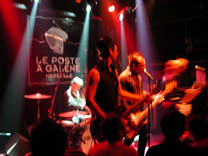 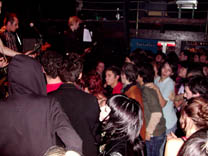 The Neurotic Swingers on stage and the public, young and energetic !

The Neurotic Swingers Live at Marseille…Meltingpod loves the Australian rockers but the French punk rock bands too. I needed to show you how it rocks here and this (free) concert I recorded just one day before Christmas 2006 at  » Le Poste Ã  GalÃ¨ne will be, I’m sure, a good moment for you ! The ambience was crazy, the people started to dance a pogo without music…I never live that before !! So I propose to you a podcast in two parts with only music (not talk, no interview) one hour long nonstop as you were with us at Marseille by night !! Have fun ! 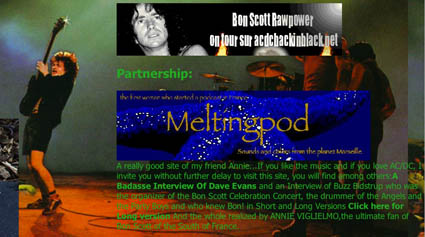 Click to enlarge the pics or to visit the different websites

MELTINGPOD : FIRST FRENCH-AUSTRALIAN ROCK PODCAST !! YEAH !!
Thanks to the Angels my first supporters with my Angels French Connection aka Hamsteratomique and French Metallian, both webmasters for sites dedicated to the Angels and Doc Neeson (The Angels ex-singer), then AC/DC‘s former lead singer Dave Evans who gave me a fantastic place to promote my podcasts on his myspace website and recently thanks to Ben who manages AC/DC Back in Black, a French website devoted to AC/DC helped by Arnaud aka Bon Scott Rawpower (Bon Scott Ultimate Fan) who keeps alive Bon’s memory on a very nice page on myspace too : both welcome me friendly on their sites with a lot of

Meltingpod Connections :
News from the Bon Scott Celebration Concert : Buzz Bidstrup (the Angels) and Dave Evans on the Australian TV show !! (thanks Glenn for the link !) Read the review and watch the video-report clicking on the pics below :

Bon Scott’s statue will be paid and the foundation SAL (Support Act Limited) got a 50 000$ cheque to help musicians; bravo Buzz !!