(but listen to part 1 before just below)

Ed Kuepper at the RocKwiz TV show in January 2006

In this second part of the interview with ED KUEPPER about his new album : Jean Lee and the yellow dog, we continue to talk quietly about the new album and his projects for touring in 2008 until walking a little in Ed’s garden trying to record the extraordinary insects who live around his house and who invited themselves to the conversation : the « tsychades » from Brisbane !!! Still a new unexpected connection with Marseille !!

Unuseful to say : try to order this album but with the bonus disc which still is full of new great songs !! Don’t miss the second version of « Skinny Jean » called : « He asked for water and Jean brings him gazoline »…what a sublime title with the incredible voice from Tommy Johnson, a blues singer from 1920!! One day I will play you the original version « Bob ascends the heavenly staircase » Ed sent me at my request to improve my musical knowleges : cool to find such a music teacher !! BTW : More infos about Ed Kuepper on this great site ED KUEPPER FILES 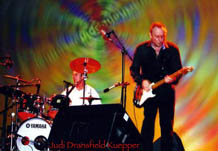 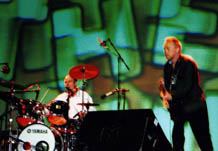 ED KUEPPER‘s interview about his new album : Jean Lee and the yellow dog at least on Meltingpod !!! Which best present for Christmas could I offer to you ? Ed really took the time to enter in the details of the whole music process during this new album’s conception and why he chose to relate this true story about Jean Lee a prostitute who was the first woman hang in Australia in 1951 ! As always Ed is very sincere and precise and I couldn’t cut anything in his talk. So I proposed to you to listen to that podcast in two parts of 30 mn ! I hope you will appreciate to share with us this interesting conversation, specially those of you who love Ed Kuepper and THE SAINTS : Ed Kuepper formed the Saints with Chris Bailey in the 70’s before starting a long solo carrier until now with sometimes live bands to perform some shows. Right now he is playing with the Kowalski Collective including two long time partners like Jeffrey Wegener on the drums and Peter Oxley at the bass. I played a lot of the album ‘s excerpts to illustrate the talk, including Chris Bailey ‘s great appearance in one of these songs !!
So MERRY CHRISTMAS to you all on MELTINGPOD !!

YEAHHH ! Watch what I just found on youtube : A LIVE video from ED KUEPPER playing THE WAY I MADE YOU FEEL the song I chose among the thousand he wrote to open my last podcast with GANGgajang; super great coincidence !!! the show was recorded in January 2006…I’m so happy !! Couldn’t be a nicer surprise for me ! Thanks you RocKwiz TV to have shared it on the internet !!

Update December 17th : I can’t believe it !! The fourth video I found out on this incredible RocKwiz TV show is JIMMY LITTLE (you remember : Buzz and the Jimmy Little Foundation) singing what ?… »the way I made you feel » !!! recorded in March 2005 Jimmy is so good but with a very different interpretation of the same words though !

For the Tatts fans : the third one was Angry Anderson singing « Highway to Hell » with a rocky girl !! We stay in family with RocKwiz…:) and you know what ? Julia Zemiro the nice hostess of this show was born at Aix en Provence, 30 km from Marseille !! French girls rule !!!

Meltingpod Connections :
Thanks to Nono55 (Noel) who made this spontaneous advertising on the TRUST forum for Meltingpod, GANGgajang and Ed Kuepper !!
Michael Butler (the Rock and Roll Geek Show : male companion of Meltingpod !!) opened a super new website for THE ASS OF ROCK (World Association of Rock and Roll Podcasters !!) Check it !! thanks you Mike !

GANGgajang introducing their production to the world !

GANGgajang is an Australian band formed in 1984 which is in fact for me Buzz Bidstrup’s family and friends. This GANG is a collective of creative individualities who are all active in different areas the whole year and who join each other sometimes for a tour or some shows : it’s maybe the secret of their long friendship and the fact the band still is alive and happy together right now !
I recorded that « interview » last February 2007 on Buzz’s mobile so the sound quality is not perfect but I hope you will have fun to listen to it. They were heading a show at Perth Western Australia and they spoke to me just before jumping on stage so they are all very excited !!
Special guests : I opened the show with Buzz’son DJ Climax ended with Buzz’s wife Kay who sang in the band with her sister Marylin in the earlier days and I play a song from my friend Ed Kuepper « the way I made you feel » to thank MELTINGWORLDS‘s first happy donators who are all Ed’s and Saints’ fans and I hope surely now will become GANGgajang’s fans too !
At the end an extract of the Pig City Concert at Brisbane July 14th with the Riptides a band formed with a lot of GANGgajang‘s members.

After this first connection, I thought to record a lot of individuals interviews later but Buzz as you know is the Bon Scott Celebration Concert‘s artistic director and after their successfull performance in February 2007, the CD’s launch last October, he is organizing right now the new show February 24th 2008 to erect the statue for Bon Scott with the collected money. If I add for the new listeners Buzz is also the co-director of the Jimmy Little Foundation who worked to give an healthier future for the Indignous Australians and was the whole year the Angels‘ and Party Boys’ drummer…you know what I mean… there never was enough free time for him to do something more with me than this podcast. Maybe later…who knows ?
Anyway I recommand to you to try to order their DVD about more than 20 years with videos, interviews, their very successfull tour to Brazil…it’s a true pleasure to watch them making music in this ambience of family.

TRUST…a legendary French band…I don’t like to use that word « legendary » but in this case I can’t say anything else except maybe : the first French band who played a good rock and roll singing clever and forceful lyrics without compromises for 30 years (with some breaks) : a lucid look about our contemporary society which definetely is necessary specially in France ! They played last Sunday near Marseille at Istres and are partying tonight at Paris (l’Olympia) for their 30th anniversary ! Yeah ! Trust quickly started in 77 with a huge and enthusiastic response among the youth and at Istres’ show (sold out!!) the faithful audience was there singing every famous lyrics at each song…sometimes with a best memory than Bernie himself…:)
That night I was LiveInMarseille‘s official photographer (thanks Stefan) and I at least bought a new camera !! I was allowed to take pics in front of the stage during « the three first songs » only (what a rule ?! admitted almost everywhere in Europe now without any logic for me) and then invited to be crushed among the crowd and in the necessity to continue as « a pirate »?? chased by the security !! Everybody knows the musicians and the photographers need to be « warm » to give their best but nobody knows when the connection between the both will happen : I would be very curious to hear the musicians’ point of views about this incredible rule.
Anyway I hope you will enjoy the photos.

Songs speaking about men with special destinies like « Mesrine » (with Deck the scratcher above the drums); Bernie introducing in a song called « your final act » his friend Bon Scott (very close to the band unill his last days); Massoud (commander in Afghanistan) : a new song with only Nono (at the acoustic guitar) and Bernie : a shared close moment…

Bernie more relaxed at the end, joking, dancing, abandoning at least his dark glasses and offering us a quiet and smiling face. Long life to TRUST !

BTW : A special thought to Mick Cocks, Rose Tattoo’s guitarist who turned me again to Bernie and Trust asking news from them in our live interview at Lyon-France in April 2007 : I hope you are both connected again too !

Meltingpod Connections :
Update December 8th : I found a « new family » in the TRUST FORUM and a link to some pretty cool videos extracted from THE LIVE SHOW at ISTRES filmed from the first line…Bernie showed many times how he was not against these « friendly pirates » encouraging to flash « as an exception » Farid the drummer to salute him (my pic above). It has a bootleg quality but

the sound is not bad…Nono in a great form, Bernie apologizing on the knees to have broken a mic, the crowd singing…the ambience is there !!

Dec 5th : A fresh report about Trust’s show at l’Olympia (Paris) December 4th on ZICAZIC (in French). Bravo Fred to have done it in the same night !!