I met BugGIRL an Australian rock band first time in Berlin last July thank to Texas Terri who turned me to them in front of one of my favorite punk rock clubs « Wild at Heart », the place to join the rockers of the planet !!! The connection immediatly was friendly and one month later BugGIRL came and play to Marseille at Enthropy and we spontaneously decided to record an interview after their show. 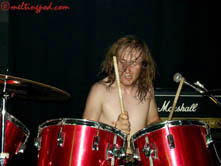 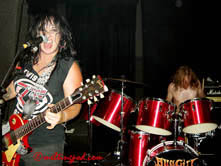 Clinno the volcanic drummer and Amber the electric woman

I started the podcast with their song Rock and Roll Hell, then Hungry as Hell, Rock Your City, Blood Sweat and Beers and Dirty in the Skirt, a pure Australian rock and roll in the tradition AC/DC, Rose Tattoo… 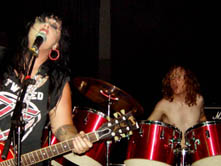 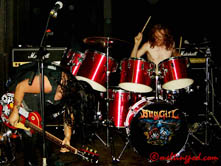 Amber and Clinno in strong connection during the whole show.

we talked a lot about the bands they love in Australia during and after the interview : it was a very cool meeting, unforgettable thank to Well Done and Alex (Vaginal Liquid Devilish Piranhas Johnny Division) who booked the show and found us a place in a garage to talk very quietly (with Ze Cardiacs who joined us) the whole night in fact until the day light surprised us…:)

a short video clip to give you an idea of the ambience!

Amber and Clinno in fusion !

Generik Vapeur the famous French street theater company from Marseille left the ex-Abatttoirs based in the old industrial area St Louis the 10/10/10 a symbolic date for a symbolic move with all the family, friends and fans who accompagned them to their new place : The Street Arts City erected in another old industrial area in Marseille, Les Aygualades.
It was hard to leave the old Abattoirs which was the theater’s stage of such fabulous events and stories, artistic or humans, full of poetry and passion during 20 years !!

Karine De Barbarin on the left picture, Bruno Montlahuc on the right picture : two Generiks who were there in 89 when the company started the adventure in the Abattoirs…between smiles and strong emotion just before the departure…

Everybody took a bag or an object and moved out towards the new place, under the rain…abandoning a few colorful feathers on the road…

The spontaneous theater show with the friends happy to become a street actor for a few minutes, one hour, during the time of the move.

Arrival in front of the new black metal building specially made for them and adapted to their professional needs. The old bar from the Abattoirs took a place in their new spacious hall.

Caty Avram and Pierre Berthelot, both founder members of the company opened a giant Champagne bottle for the guests-workers !! On the right a last thought to the old Generik’s head quarters in the ex Abattoirs before taking my car again back home…all these memories which still float around…you could find some of them saved by Sara Vidal (aka Andree Vidal : Generik Vapeur president) in her book : « the ex Abattoirs, an original story » (Publishing Cris Ecrits).

Meltingpod Connections :
A thought to Pierrot Bidon who founded the circus Bidon and then Archaos in the same spirit than Generik and who passed away last March…his shows were pure rock and roll !! Watch it !!

Lars Wallin and The Tribelars toured South of France at the end of September and played in Marseille at Enthropy a folk music with a punk spirit accompagned with traditional instruments from the Australian aboriginal people like the didgeridoo : strange no ?
In fact I knew Lars Wallin since 5 years but just through a friendly regular emailing and a podcast-interview I did with him on the phone in November 2005 called « The Aborigines love punk and roll » around our common passions : the music, The Saints and Australia !! So thank to Well Done who booked the show at EnthrÃ¶py and who allowed this first meeting in person around his music Live !! 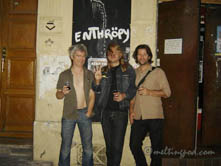 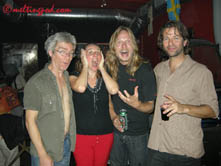 Lars Wallin (on the right : guitar, didgeridoo, vocals) and The Tribelars (Peter Hansson in the middle at the bass and backing vocals, Thorolf Andersson on the percussion) in front of the venue EnthrÃ¶py, then inside scarrying the girls from Marseille…:) (click to enlarge). 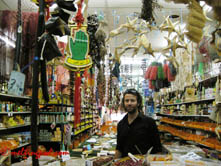 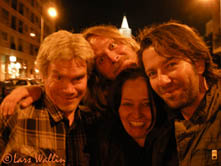 I was sure I could impress Lars the globetrotter with a visit to the shops in Noailles a very exotic area from Marseille; the wild vikings around me before they left Marseille back to Sweden.

Lars Wallin and The Tribelars Live in my bed with Beautiful People…:)