I had no photo pass, got no interview with Angus Young, sorry but with an invitation in the pocket, dressed in black with my Tatts shirt I was ready to front the big stadium Velodrome in Marseille and welcome these Australian rockers in our town with 50 000 fans !! Who said rock and roll is dead in France !! The biggest moment for me was surely AC/DC‘s entrance on stage; watch this video thanks to a fan : Sex and Rock and Roll…train !!

Obviously there was a locomotive on stage, later a giant plastic Whole Lotta Rosie who rided on it, some excited girls in bra in the audience appeared shortly in the giant screens to cheers of the crowd, then Angus made his own striptease showing us at the end just his tagged underpants, 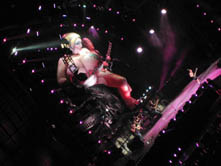 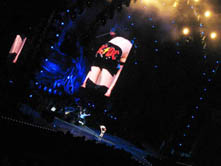 I danced like a crazy when I heard one of my favorite songs « Shot down in flames » but around me the people looked at me like a Martian…most of them only knew the last album…yeah the true fans were in front of the stage but the security guards didn’t allow me to join them. What can I say : I missed Bon Scott all the time but the Young brothers didn’t disappoint me, Angus was the devil incarnated all the time, even after a 15 mn solo in the middle of the stadium he kept giving and spreading his incredible energy in the show and in the music until the extreme limit. 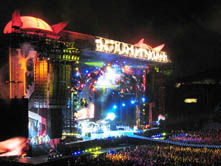 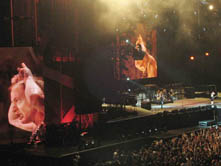 Brian Johnson made his best though : « It’s rock and roll Marseille » and the public wearing thousands brighting red hornes on the head shouted : « Yeah » !! The band answered with an explosive cocktail : TNT, Highway to Hell, For those about to rock…we salute you !! and Firework ! 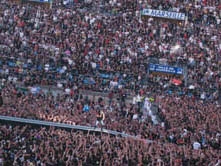 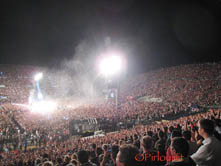 A great rock and roll show in the tradition : it was the first time I saw AC/DC, I was happy to be there that night. Thanks to my sponsor and to my friend Pirlouiiiit from LiveInMarseille for the nice pics !!
Still a little video for the end ? Angus’ strip tease ?…:) Ok, here you go :

By the way if you want to hear a very special and seducing version from Highway to Hell, listen to the one from Ed Kuepper !! For info, Ed is playing guitar with Nick Cave and the Bad Seeds and touring Europe in a couple of days from June 12th to July 19th ! Try to cross their road if you can !