The Laughing Clowns part 2 and a 50 mn long show with Jeffrey Wegener the drummer at last on Meltingpod !! We started when Jeffrey met Chris Bailey and Ed Kuepper at school in the 70’s, his first show with Kid Galahad and the Eternals aka The Saints, the first meeting with Ed back from London to found the Laughing Clowns in 78/79 and then we entered more in the details of the music and his work with Ed. 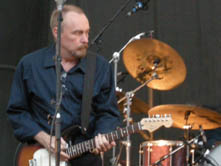 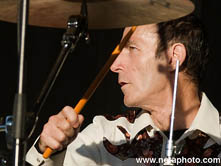 I played a lot of songs’ excerpts from their 3 albums compilation Cruel But Fair (Lucky Days, Ghost of an Ideal Wife, Holy Joe, Song Of Joy, Time No Hit But Missed) and The Laughing Clowns’ last album recorded Live at GoMa in Brisbane last January and produced by Ed’s own label Prince Melon Records (Bully in the Town, Come One Come All and Eternally yours) !!
The current line-up is : Ed Kuepper (guitar vocals) Jeffrey Wegener (drums) Louise Elliott (sax flute)) Leslie Millar (upright bass) and Alister Spencer (keyboards). 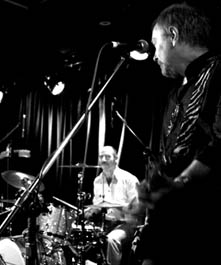 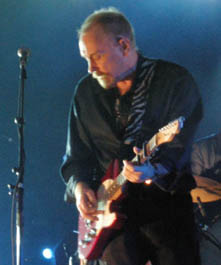 Ed and Jeffrey in Australia 2008 (pic from the greensea); Ed in Dresden with the Bad Seeds 2009

We closed the show with some of Jeffrey’s memories when he played with Nick Cave and his band the Birthday Party in 84 and the last performance at ATP in January 2009 in Australia which reunited the Laughing Clowns, The Saints and Nick Cave and The Bad Seeds the same days in Sydney !

Meltingpod Connections :
Happy to be blogged by the famous Australian « Barman » !!