I got a lot of pictures from my listeners in 2007 and I promised to choose some of them to publish on Meltingpod : so you could appreciate the work of some of these great passionated rock photographers :
Sandra Smith a French woman who made the trip to London October 31th to see one of her favorite bands : The Lords of the New Church with : 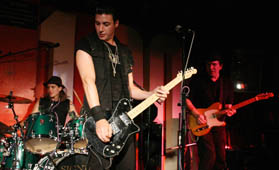 Dave Tregunna at the bass, Adam Becvare at the guitar and vocals,

Brian James at the guitar and Toby Vishram on the drums

Then Helene Keller (Helik) a German woman who took such beautiful pics from Rose Tattoo at Postdam (near Berlin) July 27th : 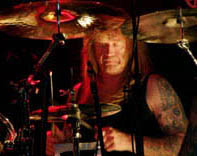 At least Errol Laggner an Australian man who had the privilege to be at the big rock event scheduled December 15th at Wollongong in Australia « Rock and Roll Heaven » with a lot of the greatest Aussie rock bands like Rose Tattoo, the Angelsband, The Screaming Jets, Choirboys, GANGgajang, The Radiators, Party Boys playing together raising money to build the Dunn & Lewis Memorial Youth Centre; Errol sent me many many pics but I haven’t a pics gallery on this blog and I just chose GANGgajang a band I interviewed without having recent live pics to illustrate my last podcast with : 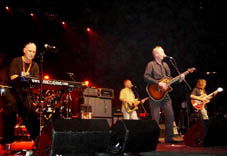 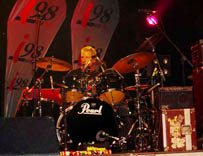 Geoff Stapleton, Mark Callaghan, Robert James, Chris Bailey and…Buzz Bidstrup ! + a part of this great line-up at the Rock and Roll Heaven with :

Geoff Stapleton, Robert James, Rick Brewster, (John’s son, Tom Brewster who replaced Buzz on the drums with the Angelsband : Buzz played with GANGgajang and the Party Boys on that show), Kevin Borich, John Brewster, DaÃ¯ Pritchard, Dave Gleeson, Angry Anderson and Buzz !!
A great emotion watching that pic and thinking I did interviews with almost all these musicians the last three years thank to Buzz…:)
So thank you again Sandra, Helene and Errol and thank to you all who sent me your pics or comments the whole last year and actively participated to the Meltingpod’s life !!