Rock bands from Marseille and some surprises with the Saints and the Angels : a great Meltingpod today…so we start with :
Gasolheads : Bad situation-Lying shooter position (the band is dead but gave the birth to the Hatepinks and Neurotic Swingers).
Neurotic Swingers : Burn to Floor-What’s your definition of underground ?
Les Balayeurs du dÃ©sert : Hello Ola-Jules Verne Impact (music played during the Royal de Luxe‘ show : La visite du sultan des Indes sur son Ã©lÃ©phant Ã  voyager dans le temps).
The Saints’ drummer Peter Wilkinson stole my mic and interviewed me !
The Saints : Never Enough-Imperious Delirium (new French tour right now)
Les Balayeurs again with Morale : a great Meltingpod song !
After Billy Hopeless (The Black Halos) and Frank Meyer (the Streetwalkin’Cheetahs), Buzz Bisdtrup (the Angels) answers to the WOMAN SHOW !!! Who will be the next one on the grill : maybe a French podcaster ?
Gasolheads again with Nobody knows…a good song for the end !

Update November 12th : WONDERFUL links to ROYAL DE LUXE LAST SHOW HERE and HERE + many SAINTS LIVE SHOWS from 77 to 2005 : Enjoy Nights in Venice Live At Paddington Townhall in 77 : a GREAT MOMENT…strangely I have the feeling it’s this rough version I loved and played in my podcast with Lars in Nov.05…and the Saints will finish their actual tour in Venice…

Great and cool drummers : Buzz from the Angels and Peter from The Saints 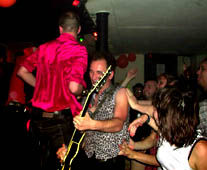 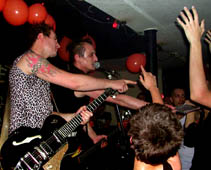 Gasolheads and Neurotic Swingers at La machine in Marseille (05/05).

Update November 6th : Speaking about drummers the Rodriguez from Austria on stage at la Machine a coudre last Saturday night : no live podcast I only danced without moderation ! rock is primal and sensual…:) 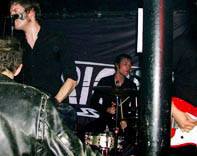 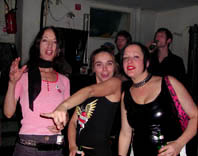 The boys sweating on stage and the girls having fun…Relax and Co ! 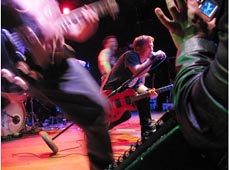 Frank on stage with the Streetwalkin’ Cheetahs in 2005 (ph : Todd Westover at the Knitting Factory-Hollywood) and in June 2006 at Las Vegas.

Frank Meyer, singer, guitarist and leader from two rock bands : the Streetwalkin’ Cheetahs (I saw in Marseille in 2002) and Sweet Justice based in Los Angeles is also music producer with Messiaz, rock journalist, co-writer of « On the road with The Ramones« , film-maker, Video Game Theater‘s creator, one of the coolest rocker of this planet and… my guest today !!! During his work at the TV channel G4 he did a lot of very funny interviews with porn Stars promoting the Man Show which inspired my own show : at least I can ask him personally THE Question !!! Enjoy this first episode : THE WOMAN SHOW NÂ°1 ! (the NÂ°0 as test was recorded with Billy Hopeless last January).
I play two songs of the Streetwalkin’ Cheetahs‘ last album Gainsville : « When God and the Devil agree » and « December in a day ». At the end of the show I play a Troggs’s cover song recorded in one shot by the Cheetahs in 1995 featuring Wayne Kramer (a great performance !!) : « I want you !! »
In the part 2 you will have the whole Gainsville album ‘s lyrics’ story, song after song… a hard and nice human story in the band during their US tour.
For the new listeners you can listen to the first poscast with Frank in October 2005 « Right to rock » and watch his great video on my first Meltingvideopod.

The Black Halos, a rock band from Vancouver (Canada), alive after the US hurricane and a year tour : stay wild ! Billy Hopeless, the B.H.’s singer tests the WOMAN SHOW NÂ°0 with a 40 minutes long interview and punk rock music from their last album « Alive without control » : Last call at the toothless saloon, Broken, Burning trash and Studio suffering. Don’t forget to watch their great video where the band is playing in a peep show for the girls’eyes’pleasure. The Black Halos are touring Europe in March/April 2006 : check the dates in your town at Teenage-head music’s website.

Billy singing in the peep show and on stage (pics from the B.H.’s website; right below : Thomaxe !)