My friends, Clair who had the luck to go to the Bon Scott Celebration Concert‘s Cd’s launch at Perth October 19th and Grant who was enough lucky on his side to see Rose Tattoo at the Hard Rock Cafe at Brisbane October 20th, shared instantly with me the pics from their show (Thanks Clair to offer me this cool pic with Buzz !! toooo cute !!)…
What could I do on my side at Marseille Sunday 21th to forget the frustration ?…to answer positively to a friend of mine FamFinale de la MatiÃ¨re who proposed to me to go to the theater La Minoterie (my second home a few years ago I was very happy to see again) and watch…a rarity from Jean-Luc Godard my favorite French films maker !! a giant movie 5 hours long !!! which is modestly called : History (ies) of the Cinema !!!
What a fun to share with around 100 hards fans this incredible kaleidoscope : a true artistic and political manifesto…very Frenchy but hey ! Godard’s world is a part of my own selective memory : Wenders, Fellini, Bunuel, Cassavettes, Picasso, Gauguin, Baudelaire, Oscar Wilde, Leo FerrÃ©…we were literaly bombed during 5 hours with somptuous pictures and brilliant words…not sure that someone will find the courage to adapt this movie in English one day but it will be interesting to share this treasure with the world too.
Back home I had this idea to show you in this quick Meltingpics my own kaleidoscope of the week end, from Australia to Marseille !! Enjoy !
Grant sent me also a spontaneous review from his show with the Tatts :â€¦ END_OF_DOCUMENT_TOKEN_TO_BE_REPLACED 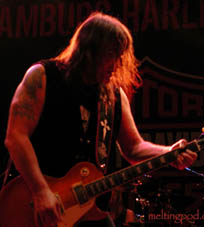 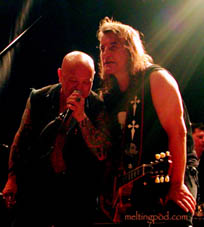 « When Mick Cocks meets Ed Kuepper » was the title you avoided at the last minute because I don’t want to fool you about the reality of such a meeting but I hope I will maybe be able to organize it one day…:) Anyway I reunited them in this podcast with the shortest interview ever recorded in the world (!!) with Mick Cocks Rose Tattoo‘s guitarist at Hamburg and the both versions of Erotic Neurotic I played at the end : a live version with Ed Kuepper and the Aints (SLSQ- 93) and the studio version with the Original Saints (I’m Stranded-76). It was very heavy to edit this podcast after so long months of forced silence and a very bad moment in my life with too much questions in my head all the time…do I stop, do I continue, how…?
I chose to start at the beginning with the motorcycles in The Harley Days at Hamburg (July 14th) through the last live recording with the minidisc, the tests with the voice recorder (which has a bad quality as expected), then a noisy silence without computer (from August 31th until this week) where I tried to find some solutions with you maybe now : JOIN MELTINGWORLDS!!!
Update October 22th : the Meltingworlds’ happy donators can click now on the kangaroo !!! (right colum on this blog)…next stop ULURU !!! 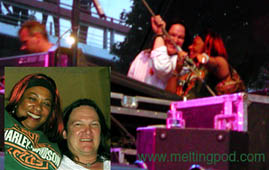 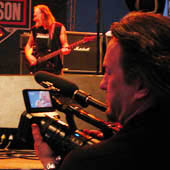 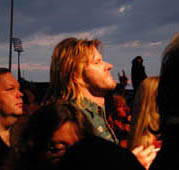 Thomas and Sheree ICS (Tatts tour management) Armageddon-Music (Tatts label) and Wacken Open Air Festival managers, Tatts video team at work, Punk rockers in Suzuki doing provocation at the Harley Days, Jase from Doomfoxx (Mick Cock’s ex-band) focused on the Tatts show (Stu Doomfoxx’s singer was beside me but too close to flash in his head : too bad he was ecstatic watching at Mick !!), Greg Clarke the Tatts noise head at the soundcheck !!

Meltingpod Connections
Update October 19 th : I forgot to give you the link to the Tatts Channel.
I recommand you the end of the chapter 5 (from the 6th minute !!) where you can agree with me watching Mick on the video (explaining the genius Angus Young) : he is born to do interview !! (click on the pic for the video) 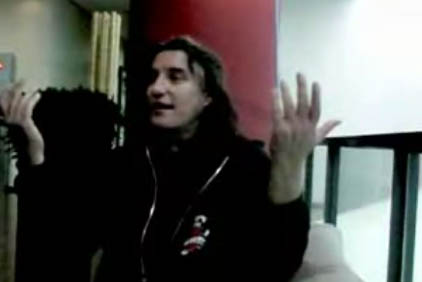 And I forgot for months to give you the links to the super interviews my friend Michael Butler from the Rock and Roll Geek Show recorded in April 2005 with PETE WELLS who found Rose Tattoo and in June 2005 (three parts) with DOC NEESON The Angels’ original singer ! Don’t miss them !

Aussierock.com.au is a new website introducing all the Aussie hard rock bands who played the Bon Scott Celebration Concert in February 2007 : you could find there a lot of information about the bands, live photos, extracts of live videos (including the Angels band : Marseille and Am I ever gonna see your face again, Rose Tattoo : Man about town, The Party Boys with Dave Evans (AC/DC’s first singer) : Baby please don’t go and more…+ the possibility to order the CD from the concert which will be launched with a great rock show October 19th 2007 at Perth (The Metro) with the Angels band, the Party Boys including two AC/DC’s ex-members Dave Evans and Mark Evans, AC/DC tribute bands 21 Guns and Hell Bells ! Another show is scheduled October 21 th at Claremont with the Angels and 21 Guns.
Check them on myspace.com/aussierockconcert too !

Sometimes I have the feeling I live myself in Australia (a lot of people think that too !!) and I ask myself if Meltingpod is not becoming an Australian rock podcast !!! I know there are many months I only spoke about them, I try to resist to the attraction but they are too charming…look how these Aussie rockers are elegant and gallant to give me now the first place above such famous bands on their links page !!

What can I do ?… I will try to stay an authentic woman from Marseille giving news from my town but I think the direction is taken to integrate regurlarly the Australian rock news in my blog and podcasts with the help of so many Australian listeners and Meltingpod’s friends. I hope you will appreciate it. If not let me know.
So some news about the Angels band who always want to come to Marseille (you can click on the link to ask them in your town too) and a nice pic sent by Dave Evans himself at one of his last show in Texas ! 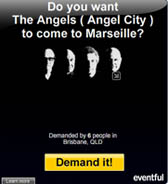 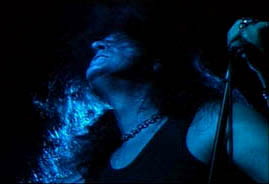 Meltingpod Connections Update October 10th
Today I thought I need to live again in my town, not only through the internet most of the time in Australia and who is coming to Marseille tonight ?? Steve Tallis a musician from Perth Western Australia !!! He is playing at l’IntermÃ©diaire (Place Jean JaurÃ¨s) around 10:30 pm; I « met » Steve one year ago on myspace and if he is here today it’s not a real coincidence as you can imagine…:) If you live in the town come to the show !!! Steve is fantastic !!And I spoke again about Australia…:)

Straight ahead last night from Brisbane-Queensland…
and MotÃ¶rhead Rose Tattoo Airbourne‘s Australian tour’s first show.
Update (10/5) to answer to Michael’s comment : It’s not me on the pic with Mick Cocks, it’s Brenda !! (she lives at Brisbane). Maybe this little story behind the pic sent by Brenda will help you to appreciate it better.
« As Rose Tattoo started to leave stage, I ran past security and yelled to Mick, « please can I have a photo it’s for Annie in Marseille » he stopped with a big big smile and posed a shot. Then later when Motorhead came out he came up to me from security area and waved so I went to him again and Airbourne guitarist took the shot of the two of us for you ! ».

Brenda (on the pic’s left) sent me that pic with that text : « I told Mick the photo was for you so his smile is for you my love !! »
Aren’t they both nice ? aaah ! Aussie rock and roll hearts…I love you !!
pic taken by Airbourne : Thank you !!

Ryan on stage (pic from their website) with Airbourne a great, young and energetic Australian rock band !! Check it !

More pics are expected from the show soon I hope. BTW : Brenda manages with Ice Management and Productions a lot a great Australian rock bands + one from Belfast (Ireland) : Inch High. Check them too !!

Meltingpod Connections : Update October 7th…straight ahead from Newcastle NSW, Dave Williams very excited (thanks a lot !!) just sent us a review from MotÃ¶rhead Rose Tattoo Airbourne‘s Australian tour :
« Hi Annie,
Motorhead – Tatts – Airbourne gig in Newcastle NSW (06.10.07) was fantastic; A huge gathering of black T shirts – which doesnâ€™t happen often up here; Airbourne continue to get the crowds vote with the energy & traditional rock banter by Mr Oâ€™Keefe (singer / guitarists) plenty of â€œhey hey heyâ€ fists in the air stuff – Iâ€™d seen them 3 times previous, thought the sound was a bit messy – but who wants it â€œniceâ€?
Tatts came on… »(more in the comments below : have a look !!!)
Update October 12th : Thanks to Clair for this show review’s link at Melbourne by Undercover.com.au. Nice pics in their gallery !

Reduced to the silence for too long weeks because some serious material and financial problems (broken laptop at the end with all the sound stuff inside, including ED KUEPPER‘s interview about this new album !!) I kept to stay alive on my MYSPACE/MELTINGPOD to spread the music I like…check it ! and add Ed’s songs to your page if you have an account there and if you appreciate him !
I’m so sorry about that missed meeting prepared for long months : I’m trying to fix this bad situation as soon as I can.

Meltingpod Connections :
Thanks to the chicks from WORLDPUNKROCKCHICKSGANG (a group I created on myspace for some gang’s action on the internet) and the boys who played Ed’s songs on their myspace homepage the whole day today; through that way his music was played, saluted and promoted around the world from Sweden, to UK, France and the whole Australia…it was a first test but it’s not bad !
PS : Message from ED : « thats great long live the punkchicksgang ! ».