In this second part of the interview with Ed Kuepper we started when The Saints arrived in London in 77 in the punk mouvement’s explosion. Ed explains how their musical evolution was bad accepted in that context, by their fans, the medias and at the end by their record company EMI : the song « Know your product » signed the debut of the hostilities because they dared to add a horn section to the band. They released their second album Eternally yours in a progressive misunderstanding until they split the band in 78 after finishing the mix of their third album Prehistoric Sounds. 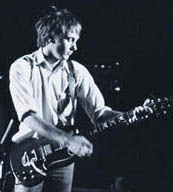 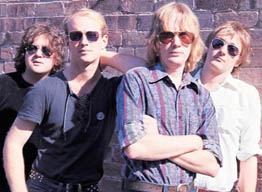 I play a lot of songs from these both albums to illustrate Ed’s talk, hoping you will appreciate at least the Saints for what they were at that time : a great and innovative band paying the high price for their freedom and independance in the music industry.

short memento about that period to fix some dates (thanks to Ed !!) :
1970 : Chris and Ed’s first meeting at school in Brisbane
1973 : Chris, Ed and Ivor’s first show at the school party; a few months later they formed the band « Kid Galahad and the Eternals »
1974 : Chris, Ed, Ivor and Kym formed The Saints
1976 : I’m Stranded (the single) recorded in june Brisbane released in sept 76 on Fatal records; (the LP) recorded in october 76 Brisbane and released in feb 77 by EMI/Harvest/Sire
1977 : The Saints’ arrival in London; This perfect day [single] recorded London may 77 [the 2 songs on the b-side were recorded in feb 77 Sydney) One, two, three, four (EP) recorded London june 77; Algy Ward replaced Kym Bradshaw at the bass in June; Eternally yours (LP) : recorded in oct 77 released feb 78 Harvest
1978 : Prehistoric Sounds (LP) : recorded in april 78; the Saints split after the mix !! the album was released in aug/sept 78 in the UK but only in 79 in Australia.

No wonder when Ed formed the Laughing Clowns in 79 he created in 1980 his own label Prince Melon Records. In 2008 he re-launched his label to produce his solo albums and this month he reformed the Clowns for the ATP festival with new shows announced next May in Sydney !!

Chris Bailey on his side re-activated The Saints alone with a new line-up changing many times with the years. For a while now he performed with Caspar Wijnberg at the bass and Peter Wilkinson on the drums, the line-up I met two times for two live interviews in 2005 and I can’t forget the first one with Chris which was my very first « interview » for Meltingpod in April 2005 in Marseille !! 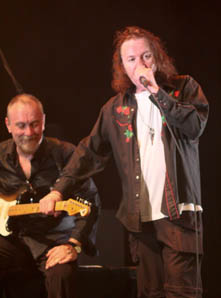 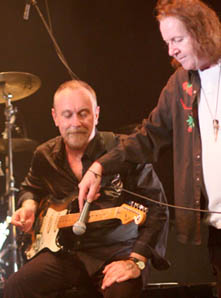 Carbie sent me both pics more in exclusive (because he loves Meltingpod I guess) telling me it was a moment of the show where Chris said to the crowd a lot of kind words about Ed until helping him to play guitar noticing Ed was exhausted after the first encore…sweet !

I recorded that interview with Ed Kuepper a long time ago, in fact in August 2007 just after Pig City but there always were new interviews to publish with Ed like about his last album’s release Jean-Lee and the Yellow dog then his European tour with Nick Cave and the Bad Seeds and I always put that interview off until later. So now after the All Tomorrow’s parties festival where The Saints reunited for a few shows with the original members Chris Bailey, Ed Kuepper and Ivor Hay, I thought it was the good time for a little history !! In this first part we started when Ed met Chris at school in the first years of 1970 until the Saints left Brisbane for London with their first album self-produced in 76 « I »m Stranded ». 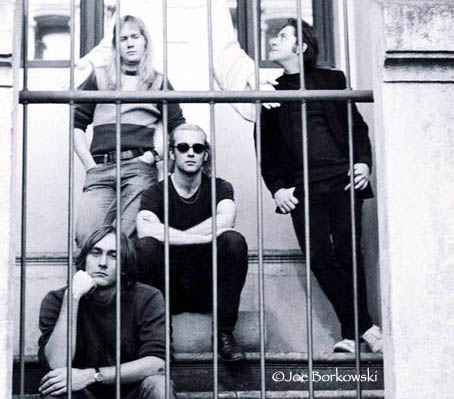 The Saints in Brisbane in 1976 (pic Joe Borkowski) : In front on the left Ed Kuepper (guitar) above him Ivor Hay (drums) Kym Bradshaw (bass) on the right Chris Bailey (vocals).

This interview is pretty different from the ones I recorded Live at Berlin with Ed; we spoke more about their life as a band in Brisbane and the political background which sometimes crossed their music.
I played some songs to illustrate our talk : Nights in Venice, Wild about you (recorded in 74), Story of Love, Brisbane security city, Demolition girl and a song called « Untitled ».
In the second part Ed gave his feeling about his arrival in London in 77 in the context of the punk movement explosion, their second and third album’s recording with EMI until the band split in 1978…stay connected!

Meltingpod Connections : Update January 23th
If you want to spend one hour comfortably at home with Nick Cave speaking about his 25 years carreer from The Birthday Party to the Bad Seeds to Grinderman and how the Saints with « I’m Stranded » were a revelation for him, go to TripleJ abc.net and listen to that great broadcast recorded in 2007 by Richard Kingsmill : a pro job !! Hoping Nick will made up with the journalists ! (thanks Lars for the link!)

Nick Cave in Mt Buller ATP January 2009 : check more great pics on Carbie Warbie ‘s website, a passion for the rock photography he shares with us at Flickr !! Fantastic pics from X and the Saints in Melbourne by the way !
Another news but pretty sad, Mick Harvey announced he quits the Bad Seeds : check his message yesterday at abc.net.au/news

I couldn’t be in person there but my Meltingpod’s correspondents in Australia sent me their spontaneous reviews and live pics about the All Tomorrow’s parties’ festival 2009 these last days at Mt Buller, Melbourne, Brisbane and Sydney with both of my favorite bands : the Saints and Laughing Clowns !!!


The Saints at Melbourne January 14th : Chris Bailey and Ed Kuepper having fun on stage together again with the horn section in the background

Ed and his Laughing Clowns (Louise, Leslie, Jeffrey) at Mt Buller January 10th : their first show since 1984 ! Alister Spence joined them at the keyboard.
Thanks to Richard Sharman for his agreement to publish here his fabulous pics; check his gallery at Black Shadow Photography for more.

To imagine the ambience at Sydney with THE SAINTS playing « Know your product », thanks to the fans !!!!!

I will publish later more of their pics to illustrate I hope a podcast soon with interviews and live recordings about these performances: in the waiting I’m editing a still unpublished long interview recorded with Ed in August 2007 about his Saints’ period at Brisbane and at London : yes it’s a shame but I never found the good moment ! so from now stay in touch !
Here the live reports from :
Froggie who was at the Saints’ Melbourne’s show January 14th,
Bob who was at the Brisbane show January 15th where the Saints created a scandal because they didn’t play their famous song « I’m stranded », a kind of ironic story !! check his blog That Striped Sunlight Sound for more,
Papageno who was at the Sydney show January 17th with Laughing Clowns and the Saints !!
Malcolm who was at Mt Buller completly seduced by the Laughing Clowns !! It’s very funny because at my request for a review he proposed to me to publish the spontaneous private message he sent to her friend in N.Y. !!
I hope you will appreciate their enthusiasm and sincerity.

Froggie after the Melbourne show :
« hey there!
it was a great performance… END_OF_DOCUMENT_TOKEN_TO_BE_REPLACED

Dimi Dero Inc : A French band who loves Australia as much as me, you could hear it in the live interview I recorded with Dimi Dero (vocals and guitar) and Vinz (bass) after the show-case they did at Lollipop Store in Marseille just before their show at « la machine Ã  coudre » in October 2008. We spoke about their connections with Australia, their friendly and musical complicities with a lot of Australian musicians : Penny Ikinger, Loene Carmen, Delphine and Warren Ellis, Mick Harvey, Rob Younger from Radio Birman and the New Christs, Steve Lucas and Cathy Green from X, the Drones… 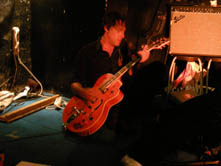 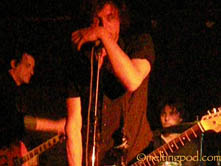 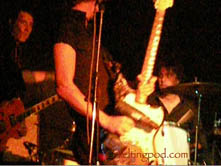 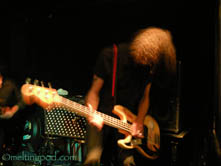 Experimentation with an electric drill used as a mediator; Vinz at the bass.

Beside their musical project with Dimi Dero Inc or with Penny Ikinger when she is touring Europe, Dimi plays in many bands as a drummer (Tex Napalm, Mark Steiner, Youpi Youpi Yeah…) and Vinz with Holy Curse.
Their next album will be produced by Rob Younger but Dimi has his own label too Stagger Records created at the origin to release a tribute album to Rowland S. Howard (Birthday Party) and for other bands in a next future.

To illustrate the interview I played some excerpts from Dimi Dero’s solo album « Good Morning Monsieur Edvard » and from Dimi Dero Inc’s both first albums « Greetings from Trauma » and « Sisyphus, window cleaning » + some live recordings at la machine Ã  coudre for the ambience !! Enjoy !! 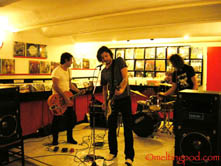 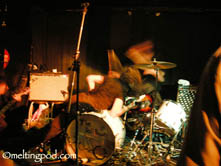 the show-case at Lollipop Store; at the end of the show, Dimi wanted to play drums !!

My best wishes to you from a pic I took during « Yes, peut-Ãªtre » written by Marguerite Duras performed by my friends Kinou and Pascale from « La MatiÃ¨re » at l’Embobineuse at Marseille…Thanks for all your Christmas/New Year’s wishes sent on myspace/meltingpod !!

« 69…annÃ©e Ã©rotique » (69…erotic year) wrote Gainsbourg for his sensual partner Jane Birkin… »2009…annÃ©e Ã©rotique » could be sung as well this year (in French) and such a lovely thought could protect us with pink glasses against all the black news we are expecting in the next days and months : massacre in Palestine (NO ! there is not self-defence when soldiers kill the babies in their mothers’ arms !!), more wars, more unemployed and homeless people after the Stock Exchange’s world crisis, more and more often the observation of the non-respect of the human rights and the press’ freedom…difficult to stay outside the society and just to speak about rock and roll but…anyway you’re here for that, so…
GREAT ROCK NEWS for my Australian listeners and readers if you still didn’t check the ATP or All Tomorrow’s Parties’ festival’s site : in a few days, from January 9th exactly, inside an impressive musical programme…
two of ED KUEPPER‘ s old bands are reforming with the original members to play there at the invitation of curators NICK CAVE AND THE BAD SEEDS :

PS : I will publish new podcasts as soon as the flu’s bad virus which catched me from Christmas will let my ears and voice free again…it’s Winter and cold here !

Meltingpod Connections : Update January 10th : THE SAINTS are giving another show with NICK CAVE AND THE BAD SEEDS at Mona Foma festival at Hobart in Tasmania Januray 12th !!
Update January 7th 2009…when I told you…